Uncover the Flavour of the Desert with Delectable Emirati Cuisine

Tipped to be one of the most intriguing holiday destinations for food lovers across the world the U.A.E is a literal melting pot of unique culinary schools blending together to create a mouthwatering combination. Often described as “soul food” of the Middle East the Emirati diet is a culmination of the traditional cuisines of the region with a modern flare that makes it an irresistible mixture of the Arab nations’ best offerings. The staples ingredients of the Emirati culinary school include a variety of meat, dairy, vegetables and several types of grain. The must-try traditional fares when exploring the Emirati menu include Mishwy, Harees, Jisheid, Ma’louba, Machbous and Fireed. Global food phenomenons the likes of Hummus, Shawarma, Tabbouleh and Falafels and Kebab Kashkash are also part of the Emirati cook book. 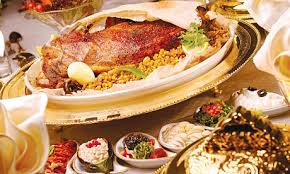 Spices are featured prominently in the cuisine as all the dishes are traditionally cooked in one pot in a stew-like broth. Aromatic spices such as cardamom, thyme, saffron and turmeric are the core spices of the culinary school which also employs leaves from indigenous plants in the form of Ghaff leaves. The sweet tasting dishes in Emirates cooking however include deep fried battered balls seasoned with sesame seeds and date sap called luqeymat. Bread crumbs and flour mixed sweetmeats flavoured with saffron, cardamom and sugar called Khabeesa is also a crowd favourite. Other delectable offerings such as Bethitha are also for the sweet toothed.
Breakfast dishes in the Emirates are also sweet flavoured with date syrup and bread varieties the likes of chebab, khameer and raqaq which are typically served with eggs and cheese. The breads pack in a toasty texture as it is baked over a hot plate that was also used by ancestral Bedouins. At the end of the meal guests are usually served a red hued tea seasoned with mint which is reportedly offered to promote easy digestion while pristine Arabic coffee known as gahwah is akin to tea in Asia and are made available in most restaurants and homes at all hours of the day.
Travellers in search of luxury hotel resorts in the Emirates should not look beyond Anantara Hotels, Resorts & Spas for their needs of accommodation. Offering guests a series of luxury hotels in strategic locations this established hotel chain is a preferred choice among leisure travellers.

Sri Lankan Cuisine To Try Out -A Taste of Lanka!