A Guide to Sri Lankan Food | The Dine and Wine A Guide to Sri Lankan Food

Very much a part of the country’s heritage, Sri Lankan cuisine is packed with unique flavours and aromas that will have your taste buds in raptures of delight! Here’s a quick guide to local food and dishes. 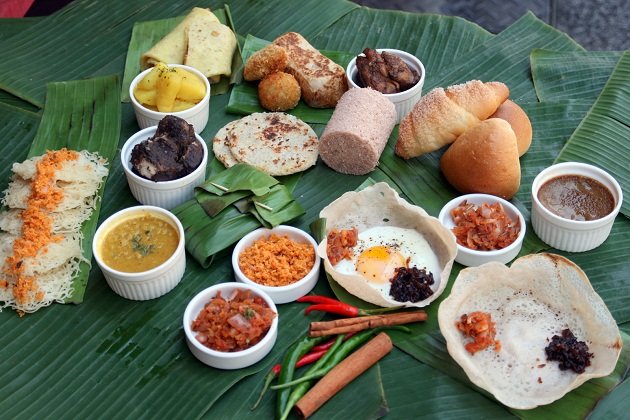 Multicultural Influences
A reflection of the island’s multicultural nature, the food here too is influenced by different communities. The Sinhala, Tamil, Muslim and Burgher communities have all contributed with diverse dishes; added to this, is the fact that former colonial rulers, namely the Portuguese, Dutch and the British have influenced local cuisine as well.

Coconut is King!
The key ingredient for cooking is coconut which is used in a wide range of forms which lend to the flavour of the dishes; coconut milk is used in curries, coconut oil for frying and grated coconut for sambols or sweets.

Spices Galore
Of course, spices also play an important role in adding that extra bit of “kick”! Chillies and chilli powder are used in most curries, while ingredients such as cinnamon, turmeric, roasted curry powder, mustard seeds and cardamom are also utilised. In Sri Lanka, resorts and hotels across the island including properties of Theme Resorts & Spas serve local dishes that let you sample such spice-filled creations.

Must Try Highlights
Here are some typical Sri Lankan dishes worth trying:

The Best Restaurants for Sri Lankan Food in Colombo

A Street Food Guide to Bangkok

Food Dishes you must Try in Sri Lanka